​
​At the beginning of May, 2015 I took Rina and Ricochet on a journey to Sedona, Arizona. It's strikingly beautiful with its red sandstone formations. But, it's intensely spiritual as well - some say even sacred. New age and mystical people believe the area is the center of energy vortexes that radiate the earth's power.

We went right after Rina's colon tumor surgery so she could continue her healing among the energy of the vortexes. Plus, I wanted to see how Ricochet would respond to the energy. I figured it would be a good way for her to re-energize too. The visit was more insightful than I expected, and Ricochet came back stronger and more powerful than ever! It was like we were being called there so Ricochet could experience a whole new level of her healing capacity. Her work is shifting.

We met with several Sedona healers and practitioners who validated many of the thoughts I already had about Ricochet's gift of healing. Listed below are some of the insights I gained while there.
​

​Mesmerized by the energy

The video below shows how Ricochet was mesmerized by the energy of Sedona. Can she see things we can't? Is she able to see the energy of the vortexes? She certainly sees something! Some may say she's looking at squirrels, but I know how she acts around them, and it's not like this! The only time I've seen this behavior is in Sedona.

Actually, one day when we were at a vortex, I was sitting on a bench. Out in the trees, I saw this white figure... kind of opaque and flowing. It was only there for a moment. But, I'm pretty sure Ricochet was seeing all kinds of them. Just by the way her eyes and head move in wonder. She was definitely connected.

The Sedona healers said she was feeling and drawing on the energy, taking it all in. The energy was helping her... anchoring her and grounding her. They said she was connecting with the many metaphysical beings that live there. She definitely had a spiritual connection! ​
​When Ricochet is out in the ocean, she does something similar to what she was doing in this video. I just never understood what she was doing until now. While waiting for a wave, she'll look out in the horizon, like she is intently looking at something. I have never seen anything. But, now I know she sees the energy of the ocean too. She knows that energy well. And now she knows the energy of the land as well.

​Ricochet had her aura read by Jamie from The Center for New Age. This is what it revealed...

She is an old soul. An advanced soul. She is psychic and intuitive. She has advanced healing powers.

She has a very powerful violet flame on either side of her, which means she is a master healer shaman. This energy is what flows out of her and onto other people. It's what attracts people to her. People resonate with her and are drawn to her. It's the violet flame that is pulling them in. They sense that she is a healer.

She is able to heal others just through her presence and energy. She's able to transform their blockages, painful memories and physical ailments. She can dissolve their pain and trauma. She releases their fear.

She has no ego and leads a selfless path of service.

To watch video footage of the reading, click here

Ricochet has been alerting to people's emotional and physical issues for many years now. The way she alerts, is to stop and plant. I asked the healers why she does this....

She stops when the person needs to stop. She feels it in her own body empathically. She feels it bubbling up in her gut. She’s clear that it’s not hers, but she’s processing it for the person. She stops to give them a chance to regroup and catch their breath.

Because she can read their whole history in a matter of moments, she already knows what their triggers are. She can also feel telepathically and energetically what may be a trigger without actually seeing it. As such, she can alert them to a trigger before they even know there is one, which helps prevent an anxiety attack.

She can handle honest trauma. Honest, raw emotion. She is able to handle difficult and negative energy without taking it on as her own.
​

​Ricochet has always been able to communicate with children who have autism on a very deep level. I asked the healers about this too. This is what they said...

Kids with autism are like Ricochet. They have the same kinds of sensitivities. They see and experience the world in the same way she does. She is able to telepathically communicate with them much easier than us humans can. The kids can hear her and understand her without all of the filters and spoken words. They understand each other and feel energy the same way.

After four days of being in Sedona, Ricochet came down with a bout of diarrhea. She had to go out every two hours for a couple of days. The day we were leaving, I brought her to the veterinarian. Turns out, she had colitis. Inflammation of her colon.

Rina's cancer was in her colon. I don't think it was coincidence. Since Ricochet is an empath, I believe she took on Rina's illness. That, coupled with the years of taking on other people's emotions and pain, along with the overwhelming energy of Sedona resulted in a cleansing.

Ricochet typically self cleanses by going in the ocean. Salt water is a natural cleanser. Who knows, maybe that is why Ricochet chose surfing as her mode of healing!

​Rina gravitated to the chapel. She was extremely happy and felt a feeling of peace. I think she felt comforted in there after all the prayers and positive vibes she received during her cancer surgery. And... her aura reading didn't show any sign of cancer! 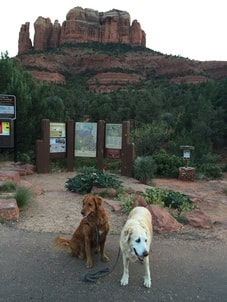 We joined the Sedona Drum Circle for a world wide
​drumming circle on Cathedral Rock.