Nearly 1 in 5 People Have a Disability in the U.S.

​Our techniques and strategies provide creative tools that only a dog can provide. Surf Dog Ricochet’s canine-assisted adapted surfing has resulted in triumphs and transformations in people who never thought they would find themselves on a surfboard. Adaptive surfing has grown into a worldwide sport. The International Surfing Association hosts the ISA World Adaptive Surfing Championship each year. Surf Dog Ricochet is an official member of Team USA. She also participates in the surf clinic that is part of professional surfer Bethany Hamilton’s Beautifully Flawed retreat for young women with limb loss. Bethany lost an arm in a shark attack when she was 13 years old. 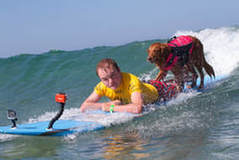 She jumped on the surfboard with Patrick the first time. It was her way of finally showing everyone what she's on this earth to do. We never taught Ricochet how to surf with a person who is disabled. We had to put 100% trust in her, and follow our heart. Everyone in the water that first time trusted Ricochet. When they pushed her and Patrick off on a wave, they glided through the water all the way to the shore as if they'd been surfing together forever. Pure bliss!

Since then, She's surfed with hundreds of different kids and adults. All different kinds of disabilities. She adjusts her surfing style based on the specific disability. It just comes natural to her. And, all the while she's in the ocean, there is such an overwhelming feeling of joy. It doesn't get better than that!

In September 2015, the first ever adaptive surfing championships were held in San Diego. Since Surf Dog Ricochet is the Ambassador for surfers with disabilities®, she attended. She also got to do an expression session with Patrick, and she received a certificate of participation! The competition was awesome and all the adaptive athletes did a tremendous job! ​​

Surf Dog Ricochet is honored to part of Team USA who is competing in the International Surfing Association's Adaptive Surfing Championship. This world championship brings surfers from around the world who have physical challenges to display their talents in a world-class competition. It began in 2015, and Surf Dog Ricochet was given the privilege to surf with Patrick Ivison in the Expression Session that year. She has been supporting adaptive athletes since 2009, and we couldn't be happier that she's an official team member of Team USA!
​ 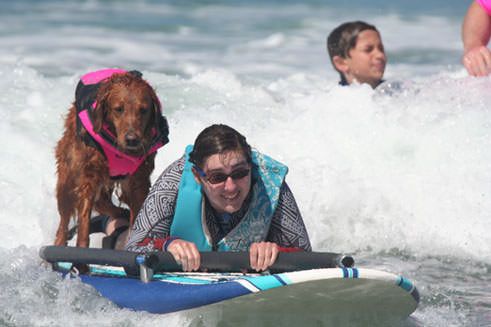 Alesha has cerebral palsy. This was the first time she’s surfed
without another human on board. She became so empowered,
she rode a couple waves on her own!!
​

Yesterday was amazing! Surfing with Ricochet really allows you to feel free and forget about your disability. For me getting to surf with Ricochet for the first time was a whole other level of freedom that I've never experienced before when surfing with people on the back of the board. Yesterday was definitely empowering and that bond that Ricochet creates with you on the board is just incredible, we are able to trust one another and I know that she has my back to balance the board and keep me safe while allowing me to go much faster on waves because she does not weigh as much as a person ~Alesha

​These are a few of the incredibly pawesome adaptive surfers Ricochet's been blessed to surf with.
​ 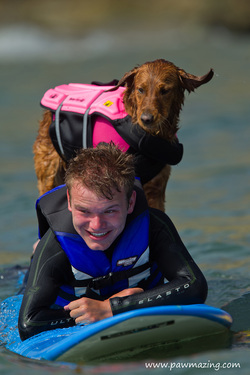 Patrick is the first person Ricochet ever surfed with! One day at the beach, she jumped on his surfboard with him, and made a statement. "I want to surf tandem with you Patrick". She hasn't stopped surfing with him or others with disabilities since.

In September 1995, when Patrick was fourteen months old, he and his mom were walking behind a parked car when the driver, who was arguing with his girlfriend, backed up suddenly, and ran over Patrick, pinning him under the car. He suffered a C4-C5 incomplete spinal cord injury, and was diagnosed as a quadriplegic.

When Ricochet first met Patrick, his dream was to walk across the stage at his high school graduation. Ricochet did some fundraising for him, and one of her sponsors, The Rose Foundation awarded a grant to cover three years of his rehab. In June, 2011, Patrick's dream came true, and Ricochet was in the auditorium to see him receive his diploma. check out this video of him walking across the stage! http://www.youtube.com/watch?v=fL-HG-4UrqY

"Ricochet has changed the course of my life. She stepped in and made recovery possible for me at the exact moment when the money was running out. Never is a million years could I have expected the impact Ricki and Judy were going to have on my life. I love them both so much! Ricki is an awesome surf partner and I have so much fun riding the waves with her. I feel so blessed to have them in my life. I don't know if I could ever express in words how grateful I am. Thank you!" - Patrick 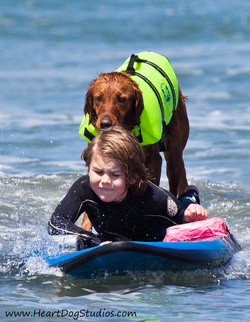 Ian is a six year old boy with a traumatic brain injury.  He used to surf with his daddy, and he hopes to surf again!  He needs several therapies and equipment to help him heal.

On July 3, 2008, Tod and Stephanie McFarland and their three children headed out on a road trip to attend a wedding, but they never made it. A horrific car accident claimed the lives of his parents and left Ian with a traumatic brain injury.

Ian used to surf with his daddy, but after the accident, he was afraid to get back on a board. Until the day he heard he could surf with Ricochet. His excitement took over his fear, and he hit the waves again!

Click this link to see a video of their first surf session http://www.youtube.com/watch?v=k-mSXIeVIuE

My heart is filled with HUGE gratitude as I reflect on all that Ricochet has done to impact Ian's life, and his quality of life for years to come. Ian is fearless with Ricochet by his side!! - Melissa (Ian's aunt) 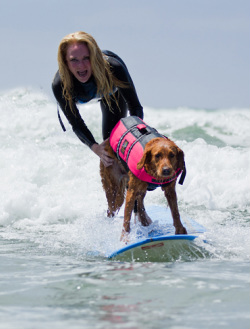 Jo is one of the most fearless people Ricochet's ever shook paws with.  Over 10 years ago, she found out she had cancer, and they needed to amputate part of her pelvis and right leg. But that hasn't stopped her!! She is one of the bravest, most inspirational people we know.

"Thank you Ricochet, Judy & Rob for making this such a pawmazing day!!! I was having such a tough time getting up on the board with that strong current and those rough waves, but woo-hoo Ricky.... you came to the rescue! Thank you for helping me balance the board (I could feel you shifting your weight to keep us upright) and by allowing me to hold on to your cute furry behind I could feel my center of gravity. The thrill of standing on the wave with you all the way in to shore was incredible!!! I love your sweet & giving spirit. Your concentration when you are surfing is something I aspire to! You are truly the best SURFice dog® ever.  So Much Love". - Jo 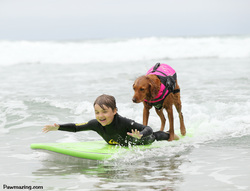 West is 7 years old, and diagnosed with autism/apraxia.

"After meeting Ricochet at a charity event in 2011, West quickly became her biggest fan. West, diagnosed with autism at 21 months old, always had a fear of dogs and water. However, meeting Ricochet gave him the courage to swim, and get close to animals. West asked many times if one day he could surf with Ricochet. Although our family hoped they would surf together, we were content with the joy Ricochet had already brought, not only our son, but the entire family. However, West did get to surf Ricochet, and it was all captured on film. The joy and excitement on West's face when he glided across the waves was tangible. West could not take his eyes off Ricochet. He thinks of her often and talks about her constantly. Whenever he tries something new he always tells us to "tell Ricochet and send her a picture." Ricochet not only brought happiness to West, but encouragement too. It is often hard for West to express himself verbally and he gets frustrated when people don't understand him. Luckily, for Ricochet and West their friendship and love does not need any words to be understood." - Lauren (West's mom) 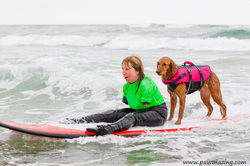 Sabine was born with very short arms, due to the drug Thalidomide. But, she has learned to compensate for her small arms by performing many daily functions and activities with her feet.

On May 17, 2012 she suffered an ischemic stroke. Her whole left side was paralyzed and she lost all fine motor skills and in her left foot, which she has used her entire life for daily activities. She also lost her speech, which was especially devastating for her, given that she is a professional public speaker. After many months of physical and occupational rehab Sabine is is able to walk. She also has regained the fine physical motor skills needed to use her feet for daily chores. she has also fully regained her speech.

Sabine met Ricochet by watching her YouTube video. She emailed Ricochet: "Do you think a woman without arms can surf?" Ricochet emailed her back saying YES, come out to California and surf with me! Sabine and Ricochet have surfed together several times, which gave her the confidence, that anything is possible… Even surfing without arms." To see a video of Sabine surfing with Ricochet, click this link http://www.youtube.com/watch?v=Og0t70p3Kzw 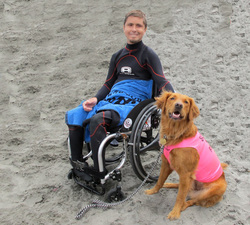 At age 2, Jake was diagnosed with Ataxia-telangiectasia (A-T), a progressive, degenerative disease that affects a variety of body systems. At age 10, he was diagnosed with Non-Hodgkins Lymphoma. He was unable to get his strength or balance back after chemo, and he went into his first wheelchair.

"Jake is a fun loving, friendly guy who enjoys hanging out with friends as often as he can. His friend, Patrick was surfing with Ricochet and Jake loved to come and watch. When they first met, Ricochet came up to Jake and put her head in his lap. It was love at first sight for Jake. He wanted to try to surf with Ricochet. When Jake and Ricochet finally surfed together, Jake had a blast. He loved the way Ricochet hung in there with him and they surfed all the way in. He could not have been happier. Jake loves the attention Ricochet gives him and her friendliness to him means the world. Hanging out and surfing with Ricochet means friends, fun and surf. Nothing is better than that." - Mary (Jake's' mom) 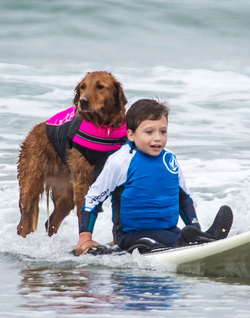 Hunter was born with Spina Bifida, Hydrocephalus, Chiari II Malformation, and WPW. He is a one RAD little dude who LOVES life and being as active as possible. He doesn't let being in a wheelchair stop him from doing anything.

He also chair skates, which is totally pawesome. Just stop by a skate park in his neighborhood, and you'll likely see him in his chair skating with all the other kids using skateboards.

Hunter used to have a tracheotomy, so Ricochet had to wait to surf with him until it was removed. But, that wish came true, and they got to surf!!
​