​Every 65 minutes a veteran with PTS dies by suicide. The video below shows what
happened when Staff Sergeant Randy Dexter met Surf dog Ricochet at minute 64.
In the military, a battle buddy is your battlefield partner with whom you accomplish a common mission. Battle buddies are always ready to assist one another. Ricochet's battle buddy is Staff Sergeant Randy Dexter. Together, they have a mission to raise awareness, remove the stigma and provide help to those suffering with Post Traumatic Stress Disorder (PTS), Traumatic brain injuries (TBI’s) and other combat issues.

Randy is very courageous in his battle, and is sharing his experiences in an effort to help others. Ricochet has the platform to raise more awareness and funds for PTS, so we came together and created the PTS Battle Buddy Initiative.

​Ricochet's soldier, Randy's transformation
It WILL happen for you too!

Click the titles below to see videos of Randy and his wife, Becky speaking on each subject. We hope that by hearing their first hand accounts it will provide more information, understanding, awareness and ultimately save lives.
​
​
To find out more about PTS dogs, therapy dogs, emotional support dogs & service dogs, please read our blog...  "So you want a PTS service dog: Important factors to consider before getting one"

We are honored to introduce you to Ricochet's good FURiend & battle buddy, Randy... 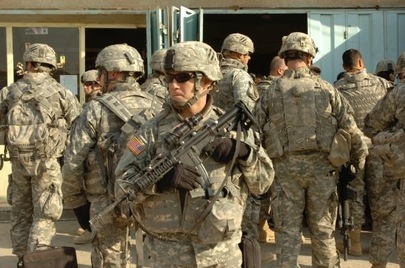 My name is Randall Dexter, and I am a Staff Sergeant in the U.S. Army. I have been a combat medic for the last ten years, and have spent twenty-seven months fighting in Operation Iraqi Freedom. On April 5, 2005, my life changed forever.

​My squad and I were hit with a very large improvised explosive device (IED). I hit my head on the metal panel behind me in the HMVEE and suffered a concussion. Three Iraqis were severely injured in the blast, one gravely with an open head wound. Being the only medic on site, I began treatment when the site was secured. The injuries that I treated were the first major injuries I had ever treated as a medic. Two of the men survived, but the man with the open head wound unfortunately did not. That was the beginning of what was to come of my twenty-seven months. That night, now that I look back on it, my whole outlook on life began to change.

For four years since that fateful day, my life symptomatically seemed to be falling apart. Every time I fell asleep I was having horrific nightmares, which made me scared to sleep. So I wouldn’t sleep, or would have to get drunk enough to pass out. I couldn’t go out in public places because crowds and meeting people I didn’t know caused agonizing panic attacks. I would snap into a rageful monster at the drop of a dime. I couldn’t concentrate on anything longer than thirty-seconds because my mind would always be back in Iraq or full of anxiety. I would avoid anything or anyone that might remind me of Iraq or trigger the anxiety that was caused, and if I couldn’t I would have to be heavily intoxicated to function.

In April of 2009, I was diagnosed with PTS, and the demons I had hidden for so long were out of the box. I began my long journey into treatment, and let me say that this has been harder than actual combat itself. I have been active in AA, individual counseling, physical activities and somehow I just couldn't find whatever it was that I needed to stop the suicidal thoughts, substance abuse, rage outbursts, nightmares, panic attacks, and all around feeling that I had no hope to a better future.
Here's how Randy's wife, Rebecca describes his ongoing partnership with Ricochet...

I see such a change in Randy when he's with Ricochet. I know Ricochet can get him out of  that downward, fast, scary slope into PTS hell. Once that devil grabs a hold of him, it takes days if not weeks to have a husband who will talk with more than one word, or a nod of his head. The non existing husband people think doesn't live here as he is sleeping all the time in a dark room only to wake once maybe to eat. Ricochet is the ONLY person (she's more than a dog) that has EVER snapped randy out of being taken a hold of by the PTS devil. I've never seen him switch so fast. It's like she knows where his switch is and no one else does."
Be sure to check our other pages for additional info and resources too!

​This Battle Buddy partnership with Randy gave him the unique opportunity to identify what he needs in a service dog, learn dog handling skills, and experience the healing power of a dog without rushing into a decision. There are many factors involved in PTS, service dogs, therapy dogs and the day to day process, and we plan to share whatever we learn with anyone else who has PTS, or loves someone who does.
​ 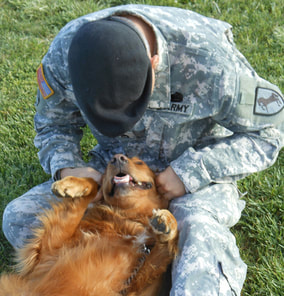 Ricochet might not be a service dog in the traditional sense, but she can sure help Randy and others learn lots of things that will help in their decision making about a potential service dog. We became a catalyst that helped to enable and empower Randy to break the cycle and gain back his independence. He became stronger, gained confidence, partook in normal activities of daily living, developed coping strategies, built trust and function outside his home. It's this momentum that helped him move forward, re-integrate into society and face challenges he had been avoiding. Our wish for him is that he can lead a normal life again. Not only for himself, but for his wife and three children. ​
​
We know our paths have crossed for a reason. And, although we don't know exactly what we'll discover, we're confident that together we will accomplish something bigger than just ourselves. Sharing his hardships for the whole world to see was difficult for Randy, but he is committed to making a difference. There is no doubt in our mind that he will find his life purpose while helping many others on their journey to recovery.

Thank you for supporting Ricochet and Randy with our PTS Battle Buddy Initiative!
​PUPDATE: In 2018, Randy became the Campus Director for K9's for Warriors, the service dog organization that Ricochet raised funds for so he could get his own service dog. Randy is doing incredibly well, and we're very proud of him! 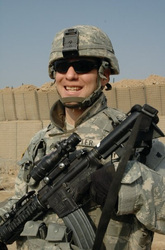 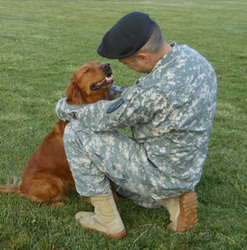 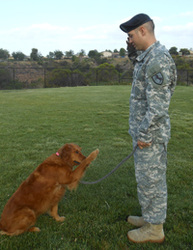 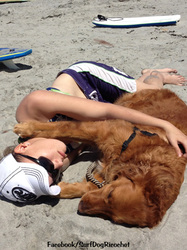 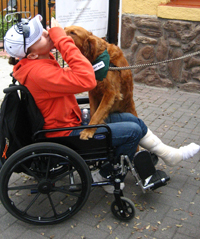 ​Here are some additional links to learn more about PTS and service dogs...

A video that is a good representation of how a veteran with PTS sees the world (warning: there are some graphic images) https://www.youtube.com/watch?v=NkWwZ9ZtPEI

For a list of accredited service dog programs that place dogs for PTS, go to https://www.assistancedogsinternational.org

Vanilla Grass, a novel of redemption shows the healing power of dogs for those struggling with PTS when conventional attempts of therapy have failed.