​On August 20, 2009, the plan was for Ricochet, and spinal cord injured Patrick Ivison to surf on the same wave, but on their own separate boards. They rode a few waves like that, but then one time, when they got to the beach, she jumped off her surfboard, and onto Patrick's. She was proclaiming to the world... "I want to surf WITH Patrick on the same board. Tandem!" The pictures on this page are the first time she surfed with Patrick.

​Everyone put their trust in her, and said "let's try it". And history was made! Since then, she's surfed with hundreds of different people and kids with disabilities. She adjusts her surfing style based on their disability, and gives them the confidence to try something they may have never imagined. Pure joy! Pure stoke!

​Ricochet was expected to be a service dog, but she stayed true to herself & chose her own destiny. As a result, she became the only SURFice dog® on the planet who surfs with kids with special needs, people with disabilities, wounded warriors and veterans with PTSD as an assistive aid. It was her idea to do it... and it's pretty much her life purpose. But, it's not just the physical aspect of balancing a surfboard... it's her ability to instantly connect with others on a deep soul level, which fosters healing, empowerment and transformation... thereby balancing lives!
​

​
​RICOCHET  [rik-uh-shey] To move in a different direction.  Change direction. The motion of rebounding or deflecting. ﻿
​

The term SURFice dog® was trademarked especially for Surf Dog Ricochet, and it's a play on words. You say it the same as "service", but with an emphasis on SURF! She was training to be a service dog, but due to her love of chasing birds, she had to be released from that role. But, with her "think different" approach to the world, she's still helping people with disabilities just in a very different, out-of-the-box way!

She's also been raising awareness and funds for human/animal causes. On July 25, 2011, twenty one months after her first adaptive surfing experience... she raised her $100,000th dollar for Patrick the Miracle Dog! Bringing her fundraising journey full circle!  She's held over 160 fundraisers, and raised funds/awareness for more than 250 human/animal causes. She's now raised over $1 million dollars!!! 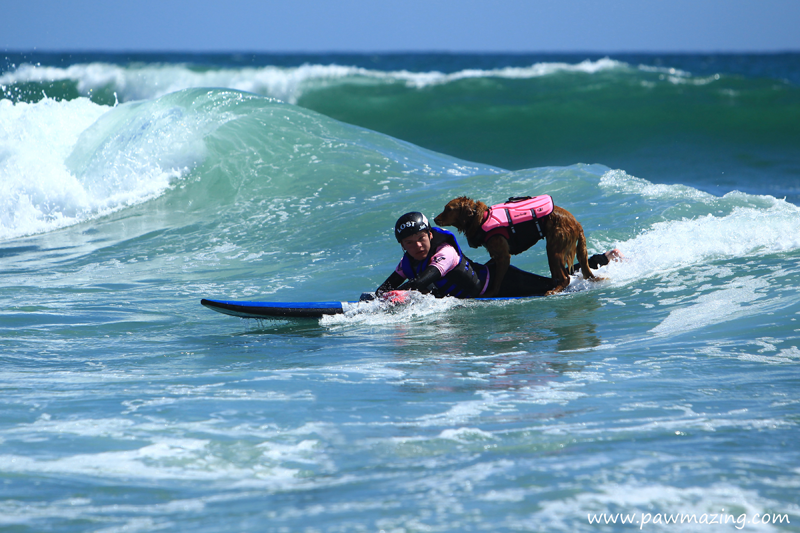